IN DISCUSSIONE A ROMA TRE

UN ANTITRUST PER I LIBRI 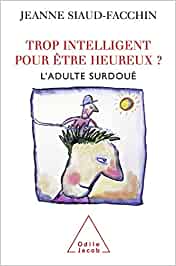 Writers of smuts: so candidly identifiable, a godsend for courses

It is well known that anonymity encourages to produce vulgarity and obscenity. The internet and the web in general foster such tendencies, that can definitely be seen as pathological. Profiting from the alleged impossibility of retrieving the real identity of anyone, invisible writers infest blogs of social forum sites of variously decent people.
As for your RS, his own blog (the present one), as well as his FB site, are frequently contaminated by "smut writers", who secrete obscene or insulting sentences, absurd judgments and insinuations: anyone of us may be one, since anyone hosts in him/herself heaps of resentment, spirit of protest, desires of revenge for real or fanciful injustice, supposed incomprehension, etc. The catalogue of such writers is always the same: it includes former students, current or former colleagues, former disciples and assistants, unknown readers or curious people who run into you accidentally, and in general pople who want to "give you a lesson". Accordingly, covered by the web, they may vomit incredible masses of vulgarities, oddities and bullshit.
This flood cannot be stopped, unfortunately, given the relative undefendedness of the web. But smut writers don't realize that they can be reasonably identified: anyone with a philological background is able to grasp cues, hints, signals, elements of knowledge, etc., that just certain persons can share! Moreover, for a linguist, insults and similar things are a real godsend for his/her own courses, especially in pragmatics: so much authentic material documenting the immense sadness of the human hodgepodge!
Pubblicato da Raffaele Simone a 07:24

One idea that bothers my mind over these days is the following. The past one has been the American Century in Linguistics—undoubtedly. The first half of it, in reality, was marked by a strong Swiss, French, British, Russian and German presence (Saussure, Meillet, Firth, Vendryes, Jakobson, Trubeckoj, Benveniste [in the picture], Halliday…) with the addition of some other smaller “national representations” (several Danish, few Swedish, rare Italians and Spaniards…), but the bulk of it (from the Thirties on) has unquestionably been formed by US people. Various factors fostered such a situation, not excluded Second World War, which made recourse to linguists and linguistics to a previously unforeseen extent! 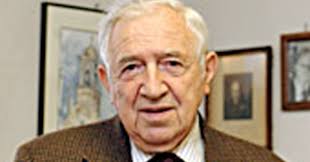 My friend Edward Stankiewicz (photo above), a superb specialist in Slavic linguistics, himself a Pole flown to US before the outburst of Nazi racial persecution and settled down at Yale, familiar (among other things) with Italy and Italian and provided like many Poles with an astonishing sense of humour, used to devote part of his Yale courses to subjects as “From Bloch to Bloomfield”. There he traced back with some joking the origins of the linguistic institutio in US as the starting point of the dissemination of it over the entire world. Nowadays the title of such a course should be integrated and form a long chain: “from Bloomfield to Chomsky and Langacker and Givón and Postal and Talmy and Bresnan and…” since the chain of American novelties in linguistics has been and still is never-ending.

The list of new brands and formulas, new recipes and trends, new directions and sub-directions, alas provided with a poor duration and lesser plausibility, could be longer than this. Meanwhile, on the other side of the street, functional linguistics, in its various forms, gave its own contribution to the multiplication of inventions, devices, publications—and chairs.

As a mirror of such a dependency there remain the huge heap of books translated over the past forty years: every type of American production, including opera minora, textbooks (as Bloomfield’s Language is), notes, interim reports, etc. Suffice it to remember that even the PhD thesis of Chomsky wife was translated into various languages, the classroom notes by Z. S. Harris in France, Labov’s opera minora and so on.

Meanwhile, new marketing forms were experimented from and by US colleagues. The main one is the annual or bi-annual road show: conferences, workshops and congresses centered on, dominated by or devoted to, such or such “starring figure”, which can this way disseminate world-wide its own ideas. No European scholar used this system ever: it is a pure US invention, many people swallowed…

In the globalized world, the directions of research to be practiced in the future are determined – with the sole exception of strictly individual research— not by researchers and scientists themselves who design their working plans but by other entities. Most Big Research, in fact, both in hard sciences and elsewhere, depends on road maps worked out in the arcane cabinets of decision makers. Year by year or with other intervals, they decide which fields of investigation are to be encouraged by financial support and which, on the other hand, must be left to individual cultivation or to virtual extinction.

Historically, such a pitiable, schematic, even brutal, mentality, generated in the US after the II World War, percolated in the whole world so as to become the overarching attitude in the financial supporting of science. It started fromthose field (as physics, biology, engineering, etc.) which demanded and keep demanding huge capital investments and a strong political consensus. Subsequently, it gradually spread on virtually every domain, as far as public and private funding institutions are concerned.The associated mentality is perceived of, and presented as, modern, up to date, efficient, and so on. In reality it ends up through identifying every field of investigation with technology or, rather, it uses technology as a filter to set apart what deserves to be supported from what does not.

At a certain moment this attitude also affected humanities. It is well known that humanities at large form a multifaceted domain, where the common product is made not of easily storable solid things or of numbers and calculations or formulas – but just by words. Accordingly, they include without any clear-cut division really rich areas (as law, architecture, etc.), relatively rich others (archaeology, history of art) and really poor others (philology, philosophy, linguistics, history, literature, and so on).Now, in such an areait is not easy to impose an etero-directed administration as far as research is concerned. Due to the multifarious variety of specializations many factors intrinsically prevent it: the high ideological vibrancy of some of its fields (philosophy, history, anthropology, etc.), the difficulty for researchers to work in big-size coordinated groups, the peculiar nature of the research being done (which implies more reflection, hesitation and inspiration than efficiency, immediate productivity and demonstrability), etc. Ignoring or dismissing all such properties, however, the industrial-technological bias in research funding affected also humanities. Big foundations, national endowments for research, international organizations – all define which are the domains and sub-domains of humanities to be made eligible for funding.

An unavoidable consequence of such a policy is that among humanities just some privileged areas are liable to got funded: prima facie they are the ones most close to society at large, and to its major current troubles in particular – in sum, mainly topics having to do with social infelicity. In practice, the areas which may feel secure from the pattern just discussed includes a variety of legal subjects, a part of sociology, some psychological topics, and so on – but, as regards linguistics, almost nothing. Linguists, who may also be cunning, have invented as a response a couple of makeshift systems: they invest on endangered languages (they have to do with discrimination), typology (it has to do with people at risk) and other apparently Zeitgeist-inspired topics and fields. Another clever response is to insist on the computerization of language and linguistic analysis and in general on what the French call industrie de la langue. No matter if the objects brought about as a product of such research prove to be of no use (as many corpuses definitely are). What matters is the product to be concrete, solid, storable, saleable.

That’s almost all, however! If you are interested in abstract and unsaleable topics such as general theory of language, description of individual languages, language reconstruction, contacts between linguistics and philology and other poor disciplines, etc., you don’t have almost any hope to get anything whatsoever. Government does not need you!

Any country gradually accommodated to this system. The European Foundation of Science, for instance, publishes any two or three years a call for funding called Framework Program, which contains the list of the scientific domain which will be admitted to funding over the subsequent years. It is an interesting document indeed, since it testifies both the heavy dirigisme of those international organizations, and more in particular it reveals how largely language and the associated sciences are insignificant as regards their eligibility for funding. Italy, for its part, as a traditionally imitative country, has followed that model: the PRIN (acronym for research projects of national interest), which are expected to be financed, with an infuriating temporal irregularity, by the University and Research Ministry, reserve a ridiculously modest amount of money to humanities and to language & linguistics as such.

As a general consequence of such processes, linguistics is today definitely on the way to become a poor (financially, I mean) science. Its specific goals (describing languages, reconstructing old and fragmentary languages, formulating interpretive hypotheses on language) seem to be of lesser and lesser interest to public and private funding institutions. In International organizations a pretty cynical label is already available to describe those forms of scholarship and investigation which are practiced without any formal financial basis: they term them “curiosity-driven research”.

My own prediction is that, at this rate, linguistics will suffer from deep alterations, bound to affect even its inner nature. One form of this process may be its reduction to curiosity-driven research, another one its merging in, or its melting into, computer science.

Dai giornali //// From the press